Using Shrimp As Bait In Fresh And Saltwater | Exposed Outdoors

Using Shrimp As Bait In Fresh And Saltwater

Shrimp are one of the best bait to use in fishing. Many recreational anglers who like to try different baits for fishing use shrimp. Shrimp can be used to catch many fish species such as, catfish, pan fish, trout, bass, and bulls head. If you like to try new baits or if you are just looking to try shrimp as a bait, read our guide on how to fish with shrimp in fresh water. We have compiled some interesting tips and techniques to use shrimp for fresh water fishing.

There are numerous varieties of freshwater shrimp in the world. These shrimps like to reside in warm and murky waters and act as an excellent bait to catch fish. The fresh water shrimp are highly effective as many fish such as bass, trout and catfish are naturally attracted to these baits. Fresh water shrimp can also be used to catch walleye and pickerel.

Saltwater shrimp are used as dead bait and thus, does not present many fishing opportunities. These fishing baits can either be used in raw or cooked form to catch different species of fish. You can catch bullheads, catfish and bluegills with saltwater shrimp.

The best way to use raw saltwater shrimp for fishing is by removing the shell. It will make it easier for fish to attack the bait and thus, you will be able to catch the fish easily. If your intended catch is bluegills, you should use a small sized shrimp or a cut-out piece of a large shrimp.

Which Fish Species Can You Catch With Shrimp?

In order to use a bait in its full potential, you need to have proper knowledge of what kind of fish you can catch with a certain bait. When your intentions are fishing with shrimp in freshwater, you must know which fish species you are going to target and whether it will be present in the waters where you intend to fish. Having this knowledge will help you in using a suitable bait according to the natural food of the fish present in the water.

Using shrimp for bait is a good option to catch fish. You need to make sure that you are using the right kind of bait in accordance with the water conditions and type of fish present in the water. Saltwater and freshwater shrimp perform different in salt waters and fresh waters. And thus, they need to be thoroughly understood so you are not disappointed in the middle of your fishing tour.

Suitable Water Conditions When Fishing With Shrimp As Bait:

Using freshwater shrimp brings the best fishing results when you use it in the same water you caught it from. This is due to many reasons, first, the fish in those waters will be accustomed to the shrimp as their natural food, and will be more inclined toward attacking them. Secondly, the water where you caught the bait from, will keep the bait alive and active so it can attract fish easily. Thirdly, there are often freshwaters where shrimp are not present as the natural bait. The game fish in these waters don’t recognize shrimp as their food, and might not have an intention to attack a new type of bait. This will result in wastage of time if you are not able to catch a fish after such hard work.

To get the best results when using freshwater shrimp, you must try using this bait in muddy and slow waters. Using fresh water shrimp in clear water might not bring best fishing results, except for when you are fishing for bluegills in late summer evening.

If you want to catch gamefish, or if you are in the mood for game hunting, using fresh water shrimp is the best option. Big game fish such as trout, bluegills, and bass devour live shrimp as they don’t find it often in the waters around them, and only ever find in the vegetation areas near the shore.

When doing saltwater fishing with shrimp, clarity of water or the fishing habitat doesn’t matter much. What really matters is the type of fish you are trying to catch with the dead shrimp. But dead shrimp also catches less varieties of fish as compared to fresh water shrimp. Fishes such as catfish, bluegills, common carps and bulls head are the only varieties that are generally easy to catch when fishing with dead shrimp.

You can catch use raw or cooked saltwater shrimp in any clarity of water. Canned shrimp is also used to get similar fishing results when catching catfish or bulls head.

When you are targeting bluegills, you can use cooked or raw shrimp in clear water where these fish are present. Using small pieces of shrimp on hook can be good when catching bluegills in fresh water. Carp, bulls head and catfish can be caught in muddy, slow flowing waters.

Comparing Shrimp With Other Live Baits:

Using shrimp can be as effective as other types of live baits, such as minnows, crayfish and other small worms. These live baits are easy to catch and keep alive. You can keep the fresh water shrimp in an aerated bucket or a live-well.

The reason why shrimp prove to be such a good bait is because they are natural present in many fishing habitat and are natural food of many big game fishes. Trout, pan fish, bulls head and cat fish like to devour shrimp if they catch these roaming in waters around them.

You can use alive shrimp to attract and catch game fish by hooking them on a fishing rod. They will stay alive for a while and will help you get a good catch.

When using dead or saltwater shrimp, you can expect a lower performance than minnows and worms. The dead shrimp don’t attract lots of active hunters. Bass, trout and walleye will not usually come after dead bait.

Big hunters such as bulls head and catfish who like to scavenge the prey, will come after a dead bait. You will need to use your movement in a clever way to catch these fish.

How To Fish With Shrimp: 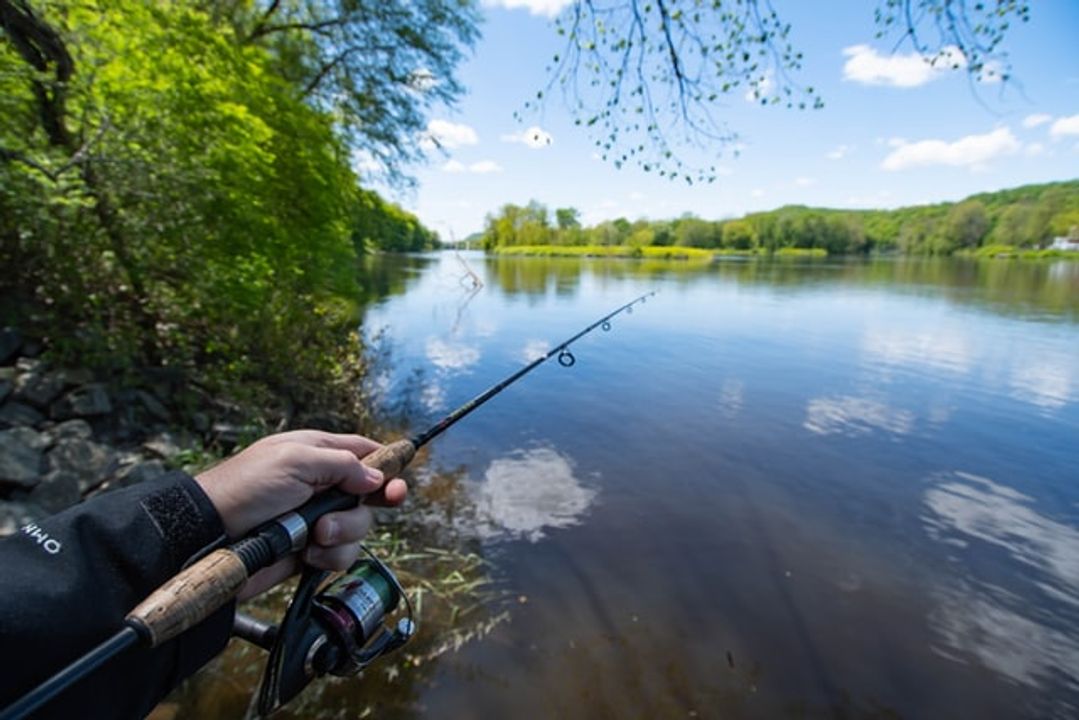 In order to get good fishing results, the first thing is how to catch shrimp. You need to find out where the shrimp is present in the water and whether there is fish present in the water where you are casting your bait or not. Shrimps are normally present around rock piles, bridges, and other vegetation areas.

Shrimps are also usually present in the depth of waters where large fish are also present. When you are using shrimp as a bait, you will find out that it is really easy to fish with them.

How To Fish With Live Shrimp:

When you are using live shrimp, you don’t have to do a lot of work. It will have a natural movement and will attract the fish by its own. All you have to do is keep the bait near the bottom where the fish are accustomed to seeing and hunting them.

When fishing with shrimp, best rods to use for fishing are bait casting and spinning rods. And since you are fishing big sized fish, be sure to use medium heavy or heavy rods which are able to bear the weight of the catch without breaking.

The second thing to consider when fishing with shrimp is the fishing line to use. I have already talked many times about the importance to integrity in all your fishing gears if you want to get good fishing results. We, at Exposed Outdoors, usually use a braided 30-35 lb. fishing line. It is also good to use a small fluorocarbon line which is 15-20 lbs. test and 16 inches long as a leader. It provides strength and is lightweight.

Firstly, you need to add some weight with your braided line and then attach the swivel. Now, attach the leader line with the other corner of the swivel and then tie the hook on. When the set-up is complete, you are ready to start fishing.

Cast your line and let the shrimp sink to the bottom. You can move the rod to right or left, or for better results, lift you line up and then drop it.

In such instances, twitching provides the best results. It will ensure that whatever depth the fish are in, they can see the bait easily. As the bait is naturally moving, it will add to the movement and help you catch fish a lot faster.

How To Put Shrimp On A Hook:

When fishing with shrimp in freshwater, keeping it alive is really important. If you deal it a little roughly, you might end up killing it. Your bait will be wasted. So you need to know how to hook a shrimp properly in order to avoid any mistakes.

You need to keep the shrimp alive so that it can move freely in the water to attract fish easily. If you intend to cast your bait near your fishing grounds, the best way to hook live shrimp is by rigging it below its horn. A horn is present above its head. This is the hardest spot on a shrimp, but the brain of the shrimp is also present right under this shell so make sure not to pierce too deep inside the shell. Go inside just enough that the bait stays firmly on the hook.

If you intend to cast the bait far away in the water, the tail is the perfect place to hook the shrimp. You can insert the hook from the bottom of the tail and bring it out from the top of the tail. The bait will stay alive and move freely inside the water.

During saltwater fishing with shrimp, and using dead shrimp, you will not need to be very careful about how you hook it. You don’t need to keep it alive and it’s a fair deal however you hook it.

There is no denying that using a live shrimp, like any other living bait, will provide better fishing experience and good catch.

When saltwater fishing with shrimp, the most common fish you can hope to catch are the ones which feeds near the bottom. Whereas, when fishing with shrimp in freshwater, the most common fish you will catch are cat fish. You can use both live and dead shrimp in both freshwater and salt waters. What needs to be considered is the fish you hope to catch. You must use the bait according to the natural feed of the fish that you intend to target.